Visitors 980
Modified 22-Aug-13
Created 2-Mar-07
122 photos
A friend of mine once said it's hard to take a bad photo in Jackson Hole. That may be true, but with all of the great photographers who live there, or who have passed through, it's hard to take a photo that hasn't been taken better by someone before you. This gallery comprises photos taken over the past decade, in different seasons, with different cameras (mostly Leica M8s and M9s, but also in the earlier shots, Leica M7s shooting Fuji Velvia. And now, some shots have been taken with the Leica Monochrom, and with the new M (typ. 240.)

Sequentially, the first photos have tended to be the more recent, but when adding some photos from the summer of 2013, I decided to work a little harder at bunching different cohorts without regard to the year they were taken. So you will see some images taken at the Jackson Hole Rodeo, or the Teton County Fair, placed next to each other.

That's one thing that has changed in my photography over time. While I will always love taking pictures of the Tetons, or at Oxbow Bend at sunset, I've long since come to believe that the town of Jackson Hole, and the people, are as interesting as the natural environment.

So think of this as a decade-long love letter to my favorite place: Jackson Hole and the greater Yellowstone. If you've ever spent time scrambling up the Teton canyons, or wanted to, think of this as a time-elapsed view of the prettiest valley and ecosystem in America. View this gallery as a slide show if you want to get a sense of what a great corner of the world Northwest Wyoming is. JB, Summer 2013 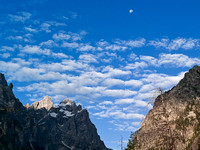